On Tuesday, 10th July in Leipzig, the VPH Institute President, Denis Noble, and Sydney Brenner proposed and opposed respectively the motion that “There is no privileged level of causation: an organism is not defined by its genome”. 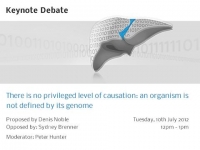 The Virtual Liver Network hosted the keynote debate that took place during the 4th Conference on Systems Biology of Mammalian Cells and it was transmitted on live stream on their website. The debate gave voice to the views of two important scientists of worldwide fame: Denis Noble, proposing the motion, and Sydney Brenner, opposing.

Current President of the VPH Institute,Denis Nobleis a pioneer in the field of systems biology and a passionate advocate of multidisciplinary, integrative approaches to tackling the complexity of biological systems. Quoting from his paper on Biophysics and Systems Biology:

“Systems Biology is set to revolutionise the fundamental principles of biology, including the relations between genotypes and phenotypes.... to succeed in this, systems biology will need to develop the theoretical framework required to deal with multilevel interactions”

Sydney Brenner, Nobel laureate in Physiology or Medicine for his pioneering work contributing to the discovery of messenger RNA, and the use ofC elegansas a model that helped to deliver novel insights in developmental biology, ageing and apoptosis. Quoting from his Nobel Prize interview:

“There is now a crisis developing in biology that completely unstructured information does not enhance understanding, and what people want to do is to understand, which means you have to have a theoretical framework in which to embed this...”

On the one hand, Sydney Brenner has proposed that the correct level of abstraction to gain understanding is the cell and the focus should be organising biological information at that level. On the other, Denis Noble advocates the need to consider integration at all levels of organisation in order to unravel biological complexity.

The debate was smartly moderated by the VPH Institute Director,Peter Hunter, who steered the discussion between the protagonists, whose opinions in the eyes of some are conflicting, while others interpret their arguments differently, believing that they may not be quite so far apart as it at first appear.

The European Commission has published the Roadmap for the Pact for Research & Innovation in Europe, which is open for feedback until 13 May. -Read more-
The Technical Group on Computer Simulation of the International Society of Biomechanics extended the call for abstracts -Read more-
If you read an interesting article that you want to share with your community, send it to us: we will insert it in the next newsletter! -Read more-
Are you familiar with modeling and simulation in drug development? Fill in the survey! -Read more-