On 26 June 2013, under the patronage of MEPs Mr. Sean Kelly (EPP, Ireland) and Professor Vittorio Prodi (S&D, Italy) an event was held in the European Parliament entitled "Towards personalised and in silico medicine: eHealth Action Plan and VPH". 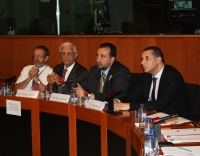 The focus of this well attended event was on the need to showcase EU funding eHealth success stories such as VPH, in order to overcome the barriers identified in the eHealth Action Plan 2012-2020. From the speakers' presentation came out clearly that VPH can be used to facilitate personalised medicine in the EU, reduce public health costs and improve diagnosis and prediction.

Professor Vittorio Prodi in his opening statement, praised VPH for its efforts in toxicology, an area which is of particular interest to him, and also stated that the VPH "had something to offer everyone".

Mr. Sean Kelly, in his concluding remarks stressed that the deployment of eHealth technologies such as VPH was an "economic imperative" which could help stem the tide of chronic diseases and control spiraling healthcare costs. Mr. Kelly called on his colleagues from the European Parliament to ensure that the interests of VPH are represented in the upcoming  report by the European Parliament on the eHealth Action Plan, stating that "with political support, we can ensure that personalised medicine becomes a practical reality".

The event also saw participation from a range of different European based stakeholders such as the Standing Committee of European Doctors (CPME), the British Medical Association (BMA) and the Centre for Alternatives to Animal Testing (CAAT).

This provided a unique opportunity for VPH researchers to meet with those engaged in the creation of key research and innovation policy and ensured valuable exposure of VPH to a broad range of policy makers.

The VPH Policy Affairs Working Group will be working hard to capitalise on the success of this event and will aim to ensure that the interests of VPH are taken into account in the upcoming own initiative report on the eHealth Action Plan.

During the opening ceremony of the VPH conference, a lecture-performance featured physiologically based dancing digital twins. This could lay the basis for a new patient-centric and preventive healthcare system. -Read more-
After 4 years, the VPH Conference was held as a physical event in Porto (Portugal) from the 6th to the 9th of September. -Read more-
As parallel activities just before and after the VPH2022 conference, 4 interesting workshops took place organised by members of our community. -Read more-
On 12 September 2022, the European Economic and Social Committee (EESC) published its draft opinion on the European Health Data Space (EHDS) -Read more-