VPH-Share received and “excellent” rating at their final review

Reviewers were enthusiastic about the project achievements 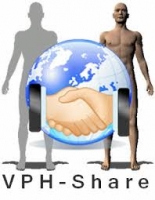 The first afternoon of the review began with the first user story:

The Clinical User Story: Pim Tonino, a Cardiologist at Catharina Hospital, set the clinical context of the Hospital and the importance of Fractional Fluid Reserve Measurement in Cardiology. Rod Hose, VPH-Share’s Coordinator and Professor of Computational Biomechanics at the University of Sheffield, presented the scientific context of the importance of cloud and HPC computing in enabling sensitivity analysis of models, and simulations over the physiological envelop of patient parameters as well as providing multiple runs of computationally expensive models. Ellen Nijssen, a Medical Engineer at Catharina Hospital, and Paul Morris, a British Heart Foundation Research Training Fellow at the University of Sheffield, demonstrated how their data could be shared through VPH-Share and how virtual versions of the Fractional Fluid Reserve measurements could be conducted using one-dimensional and three dimensional fluid flow models, including sensitivity analysis of those models. The reviewers were then taken to see the functioning Cath Lab in operation. Juan Arenas and Susheel Varma demonstrated how the Physiological Envelop of patient rest and exertion conditions could be simulated in parallel for a cerebral aneurism model. Finally Pim, Ellen and Paul, rounded off by comparing the results of the measured and virtual Fluid Flow Measurements on a patient case.

The morning of the second day began with Rod Hose outlined how VPH-Share had addressed the reviewer’s recommendations by taking steps to ensure that VPH-Share would be sustained beyond its funded period to serve the VPH community. This was later reinforced by Adriano Henney, Executive Director of the VPH Institute, who described how the VPH Institute’s Board had accepted two motions that confirmed the adoption of Biomed Town and the role of the VPH-Institute in offering VPH-Share as a service.

Over the rest of the morning, the WP leaders outlined their contributions to the final phase of VPH-Share: Pablo Lamata (Kings College London) and Juan Arenas (University of Sheffield) described the Users of VPH-Share, the four flagship workflows and the 19 use cases, and the development of User Interfaces to serve them; Tomas Pariente (Atos Spain), Steven Wood (Sheffield Teaching Hospitals) and Marian Bubak (Cyfronet, AGH) described the semantic, data and cloud services provided by VPH-Share; Giovanni Erbacci (Cineca), Karl Stroetmann and Keith McCormack (University of Sheffield) described the conversations with external VPH stakeholders in their dissemination, outreach, exploitation and sustainability activities.

The afternoon continued with the user stories:

The Educational User Story: Andrzej Kononowicz, an Assistant Professor at the Karolinska Institutet, Stockholm, described how he had exploited the scalability provided by VPH-Share to provide access to a virtual patient educational model, run in Open Labyrinth delivered in a MOOC (Massive Open Online Course), providing access to over 20,000 learners.

The Industrial User Story: Herman ter Horst, a Principal Scientist at Philips Research BV,  and Mari-Cruz Villa-Uriol a Lecturer in Computer Science at the University of took us through a journey of using machine learning to predict the readmission risks of Acute Coronary Syndrome; showing how the morphology of aneurisms can be clustered into six distinct groups; and finally shows the use of Azure’s Machine Learning interface on a publically available dataset. Kenji Takedo, Solutions Architect and Technical Manager at Microsoft Research Connections EMEA team, UK and Musa Yildiz, Global Client Director at Microsoft Netherlands rounded off explaining the importance of initiatives such VPH-Share in providing Research as a Service.

The Research User Story: Juan Arenas, CISTIB’s Portfolio Manager at the University of  Sheffield, demonstrated the additional functionality add by VPH-DARE@IT to the VPH-Share platform by their project team. In a matter of minutes, a new project skin was created, which allows a project to brand its infrastructure and make visible and available the resources: applications, data and workflows, relevant to that project group. He described how VPH-DARE@IT was able to exceed the terms of its Description of Work by having fully functioning workflows instead of just mock-ups available for their review, using VPH-Share’s infrastructure. He then demonstrated the FreeSurfer workflow, which calculates surface areas and volumes in the brain from an image stack. The input was generated from a query performed and saved through the Master Interface. He was then able to perform a query federated across both the input and workflow output data. This User Story demonstrates how a research project can benefit from and contribute to the VPH-Share infrastructure.

Throughout the review, Keith McCormack set the context and wove together the strands of the review, emphasising the exploitation of VPH-Share by different user groups and how the sustainability of VPH-Share had been pursued through interactions with external VPH stakeholders, including cloud and software providers and supporting the four types of users illustrated by the user stories.

The reviewers feedback was that the project was excellent and important. It had met all its objectives and had exceeded the work outlined in its Description of Work. Particular mention was made to the positive and open attitude of the project and its service to users.

Well done to the project team!!

More information on the project can be found here.

0n 15 June 2022 the European High Performance Computing Joint Undertaking (EuroHPC JU) announced the selection of five new sites which will host the next generation of European supercomputers, including the first European exascale supercomputer, JUPITER. These new systems will power new applications in a wide range of areas, from designing medicines and new materials to fighting climate change. -Read more-
European Research and Innovation Days is the European Commission’s annual flagship Research and Innovation event, bringing together policymakers, researchers, entrepreneurs and the public to debate and shape the future of research and innovation in Europe and beyond. -Read more-
In 2020, the European Commission’s Joint Research Centre (JRC) funded, through its Exploratory Research programme, the project “MyDigitalTwin –Trusted Personal Digital Twins in a Transformed Society”. -Read more-
The oncNGS project will launch a new Call for Tender soon and organises a Suppliers Information Day on 29 June 2022 -Read more-