Despite the economic crisis, EU’s progress towards the EU2020 objective of spending 3% of GDP has shown an improvement. 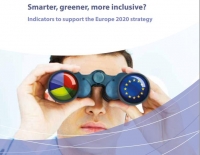 The Europe 2020 strategy, adopted by the European Council in June 2010, aiming at establishing a smart, sustainable and inclusive economy with high levels of employment, productivity and social cohesion, included as one of its key objectives to be reached by 2020 the area of research & development (R&D).

So far, in terms of R&D, EU’s progress towards the EU2020 objective of spending 3% of GDP has shown an improvement, following a relative stagnation and despite the economic crisis, as a result of which the innovation gap with the US and Japan has been reduced. This was showcased in the Eurostat 2015 edition of the publication “Smarter, greener, more inclusive?”, released in March, which provides trends and latest statistics to monitor the progress towards the headline targets of the Europe 2020 Strategy.

It needs to be taken account that significant differences exist across the EU.  While countries such as Finland, Sweden, Germany or Denmark share patterns of high expenditure, of over or around 3%, an important part Eastern and Southern Europe, including Romania, Bulgaria, Cyprus, Malta and Greece, have their levels below 1%. However, there has been an increase in R&D intensity in most Member States, with the exception of countries Croatia, Luxembourg, Portugal, the UK and Sweden.

In the EU, R&D activities are carried out by four main institutional sectors: the business enterprise, the government sector, the higher education sector and the private non-profit  sectors.

The full report is available here.

The 5th edition of the summit was held in Paris on 16 November 2022 and counted more than 78 sessions on innovation in healthcare. -Read more-
Building on their rich work in digital health, EPF began engaging at different levels on Artificial Intelligence in healthcare, from policy to capacity building in 2020. -Read more-
The first high-level partner meeting of the EDITH-CSA (European Virtual Human Twin in Healthcare - Coordination and Support Action) Consortium took place in Leuven, Belgium on 29-30 November 2022. -Read more-
On 29 November 2022, an article was released presenting in laymen terms what in silico medicine is and what its possible applications are. -Read more-